I have the non-Atom version of Jungle Devil; & there is none in any of the 7 units.

this is the old cover:

It was a much longer story,

What is interesting about "Jangaru Makyo" is that it was one of the earliest manga stories Dr. Tezuka wrote, as far back as 1948.

I recently broke down and purchased a copy of the March, 1965 issue of "Mighty Atom Club" which features the first installment of the manga adaptation of "Earth Defense Squadron/Moon Monsters". The issue is in very good condition and has a lot of features that are interesting to Astro Boy fans such as: info about the Astro family and merchandise such as the album which features a sort of sequel to "The Moon Monsters". The only thing bad about the issue is that a small piece is cut out of page 59 & 60. (It might have been a coupon of some sort, but I can't really tell.)

The manga episode is interesting as the first two pages are in color as was the fashion in Japanese mangas. (This is similar to what was initially done in U.S. comics of the thirties before they went to all color, some strips had a few color tinted pages for some of the different strips featured.)

Any way I am awaiting the May, 1965 issue which has the last installment of the "Moon Monsters" adaptation. (The middle installment was sold out, but I have an alert going if it becomes available.--Astrobuddy

If the missing part is below Higeoyaji on p 60, it stars out saying〈おねがい〉<Please>. If at the top of the page, it has tezuka characters, including Atom dressed as a Mexican.

Thank you, Jeffbert. Yes, pg. 60 does have a picture of and is below HigeOyaji and Atom is at the top of the page wearing a sombrero. On pg. 59 what was cut out?

Also could you check out the page from the Sept. 1966 issue BrutalDawnFawn posted on page one of this post and tell me if it is a scene from "Cobalt goes Crazy" as I suspect?--Astrobuddy

BrutalDawnFawn wrote:
Was this entire magazine re-printed in 2009? I found this on amazon.co.jp: https://www.amazon.co.jp/exec/obidos/ASIN/4862354939/osamutezukdic-22. According to http://phoenix.to/64/64-1.html, Jungle Makai/ Jungle Devil Boundary was re-printed here. I found it before ordering the originals on mandarake. But I couldn't tell if this is a re-print of the magazine and/or with other astro boy stories mixed in together. The price tag's a little much for me to find out what's actually in there

Jungle mystery is NOT included here.

These are reprints of the original versions of the MIGHTY ATOM stories. As such, they are treasures that die-hard Atom fans would keep forever.

THERE IS SOME JUICY stuff in the March 1965 issue. It says that the cost for making Atom was 10,000,000,000,000 Yen. Among the 7 powers listed is his little known nose antenna. I will be copying and using google & Bing to translate this data well into next week. They do fairly well with text, though poorly with dialog. I doubt I will ever be able to read Japanese, though; though, I am able to recognize kana & a few Kanji characters.

I think it was the margin text from the January 1965 issue that mentioned the yet to come episode based on Jungle Devil.

as mentioned, the 1965-03 issue has good stuff in it, including a map of Atom's neighborhood & a floor plan of his house. I have been able to 'read' most everything on the map and the floor plan, except two kanji characters.

Can anyone identify the highlighted Kanji?

Got some new info from more research about chapters contained in issues August '66 - November '66. (it's confirmed that they ALL have Atom chapters in them. 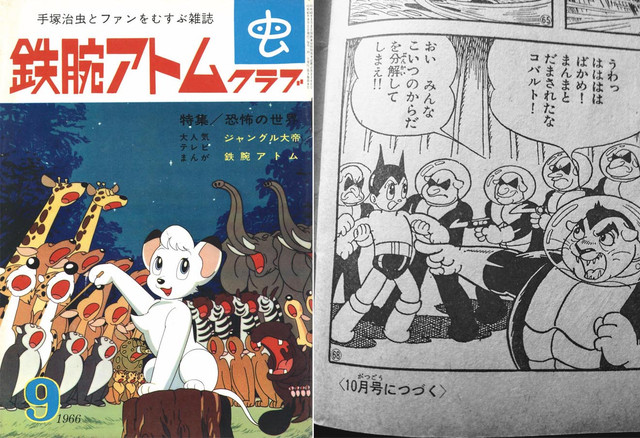 October '66 - "Demented Cobalt" (Part 2) (chapter ends)
Also, I found something else that I couldn't identify. Maybe someone here knows? 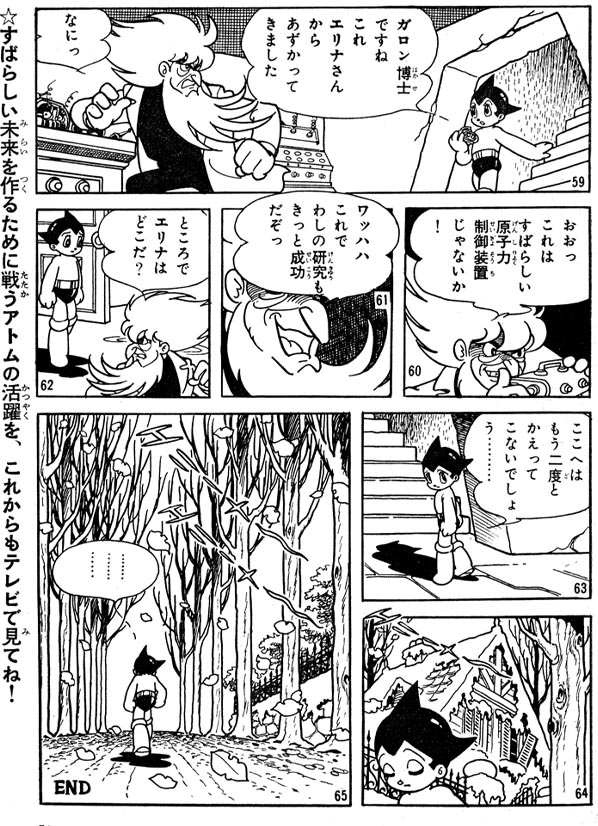 So... based on this, the only issues that don't have Astro Boy chapters in them are the Oct. and Nov. '65 ones. (or at least based on the knowledge we have.)

ASTROBUDDY wrote:The only thing bad about the issue is that a small piece is cut out of page 59 & 60. (It might have been a coupon of some sort, but I can't really tell.)

Oh! That sounds interesting! Was it a corner piece? I think I may have a semi-answer. (Maybe, Jeffbert's probably the one who could answer this).
This could have been an "application ticket". Looks like magazine owners/subscribers could send in this corner piece (proof of subscription) along with 3 interesting things they found in the issue and the answers to the Mushi Productions Pop Quiz questions by a certain date and receive something in return. (Not sure what they mean by that - if it's an entry for a chance to win prizes or what

) is this similar to what you have?
Here's what came from one of my copies: 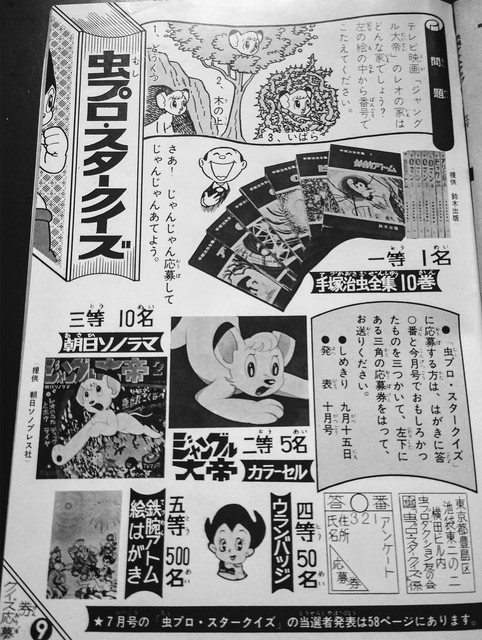 It's interesting to see what else is in these gold mines of content! Thanks Jeffbert and ASTROBUDDY for sharing! I'll go through what I've got inside my issues besides the comic chapters. The extras could be sort of like "the making-of" facts fan mail, and activities.

Tetsuwan Penguin wrote: According to the Anime, Chi-tan was made for a royal couple that couldn't have their own children. He was one of several robots made for a contest, and the couple would pick the 'winner'. For some reason, Chi-Tan wasn't adopted by the royals, and Astro's family ended up with him, mostly because Uran fell in love with the baby robot, and wanted him for her little brother.

Oh, okay. yeah, I'm starting to remember that. I like that plot better. From what I gather from the translation commission, click for spoilerChi-tan is simply made for Astro and Uran. He constantly wanders off and causes trouble. This leads him to being kidnapped by crooks and flown across the world to be sold off at a high price. (to the "Bururu" people (the black people in the chapter)). However, he causes so much trouble and destroys so much that the new owners don't want him anymore and kick him and the crooks out of their country. The crooks abandon Chi-tan at the side of the road where they found them. Chi-tan is eventually found by the parents along with Astro boy, who had fallen from the sky after Chi-tan took all his energy in his attempt to rescue Chi-tan. Definitely better in the anime version, IMO.

Btw, I'll have to check out Tezuka's earlier "Jungle Devil Boundary" story. Definitely easier to find. Is that a e-book version, Jeffbert?

BrutalDawnFawn wrote:
Was this entire magazine re-printed in 2009? I found this on amazon.co.jp: https://www.amazon.co.jp/exec/obidos/ASIN/4862354939/osamutezukdic-22. According to http://phoenix.to/64/64-1.html, Jungle Makai/ Jungle Devil Boundary was re-printed here. I found it before ordering the originals on mandarake. But I couldn't tell if this is a re-print of the magazine and/or with other astro boy stories mixed in together. The price tag's a little much for me to find out what's actually in there

Jungle mystery is NOT included here.
These are reprints of the original versions of the MIGHTY ATOM stories. As such, they are treasures that die-hard Atom fans would keep forever.

That's still pretty dang cool tbh! It looks like a highly coveted item. I'm like that, but for Kimba (Jungle Emperor). I still find Atom really awesome, tho.

EDIT:
Unless I overlooked something, none of the Club stories are on the 7 UNITS of Atom original versions.

iT APPEARS THERE IS BUT TWO GAPS IN which no ORIGINAL ATOM STORIES APPEAR: