The color remake has Uran impersonating Atom on two occasions, both of which show her wearing Atom's briefs/Speedo/swimsuit or what ever you call it. But, no such thing exists. It is a part of his skin, it is as much an integral part of him as his pink skin itself. This is just one example of a humorous inconsistency in this series. Another is the Atom hair that she wears in the time-machine episode, not to mention the fact that they were in a time and place that would not have either item available.:wahah:

Then, there are his boots. These were gifts from Kathy, and had no special properties. Nevertheless, when he ignites his leg jets, the boots are not only not incinerated; but they conveniently adopt the attributes of his feet and legs. :wahah:

And now, for some humor. There was a cartoon and character called "Atom Ant", whose famous line was Up and at 'em, Atom Ant! Only after I started this new thread dealing with Atom's briefs/ bathing suit/ pants, did I think of the pun:
Up, and Atom, Atom's pants!

1) Uran happened to have some green and black underpants that appeared identical to Astro's skin.

2) The Atom Hair was produced from Detective Rock's time machine. He has a replicator on board.

3) After Kathy gave him the boots, he went swimming with them on. The colour ran and stained his legs permanently red. The rest of the series he wasn't actually wearing any boots.

I've always wondered about his boots thought. When I was little I had a dream I found Astro's boots and I took a look inside them. At the bottom there were cigarette lighters that could be ignited by pressing down with your heels. The only problem was, the flame came out the back instead of out the bottom.

And another thing. How many spare heads does Astro have? And where does he keep them?

And another thing. How many spare heads does Astro have? And where does he keep them?

Only his mama knows for sure. He always went to her when needing a replacement, and was sure to ask her not to tell papa about it! B)

I'm thinking she hides them in the pantry.

Doesn't McBain say something like "Up and at 'em!" in the Fallout Boy episode of The Simpsons? Except it didn't quite sound like that?
hahaha!
Top

Yeah! He was supposed to say "Up and atom!" but he kept saying "Up and at them!"

Which reminds me of something almost toally irrelevant. Last night I dreamt I could only speak German. But I didn't understand a word of it. So I was talking to a German guy and hoping I was saying what I meant to. :huh:

This thread reminded me of a site I found awhile ago that deals with the mysteries of Astro Boy:
http://plaza.harmonix.ne.jp/~kotani/atom.html
Might want to paste that URL into Babelfish so you can read what it says.
http://babel.altavista.com/tr?lin=ja&lout=en

That translation make even the DVD's subtitles look good by comparision! Thanks for the links! :wahah:

Here are some pics of Atom's pants. I was really surprised to see the fourth one. Anything for a laugh, even if it goes against the well-established concept of Atom being as naked as he can be while 'wearing' his 'costume'.

Here are two scenes from "Astroboy goes to school", with him showering in the full costume,

and fully costumed merrily running from the shower, towel in hand. 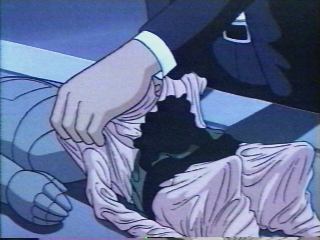 Here Atom is losing his brief, which we were formerly persuaded would have left his shiny metal ass showing.* 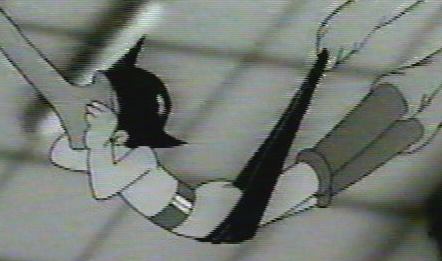 * Appologies to Bender for using his line.

I would have thought that the waistband was attached to the brief, but what do I know. I guess it was made by a non-union sweatshop.

Uran wants to be the hero, and using a non-existent pair of Atom's pants, prepares to duke it out with Bruton/Pluto:

Quite a nice fit, considering she is three to four sizes of children's clothing smaller than Atom.

So, it appears that when humor is at stake, rules are made to be broken.

Users browsing this forum: No registered users and 3 guests